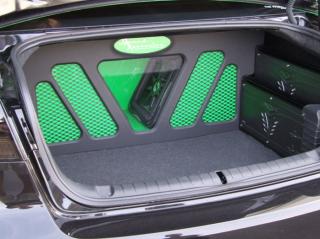 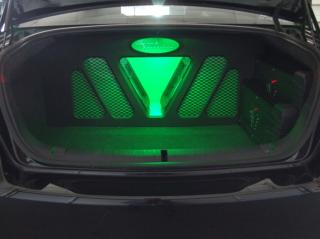 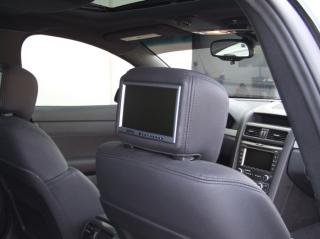 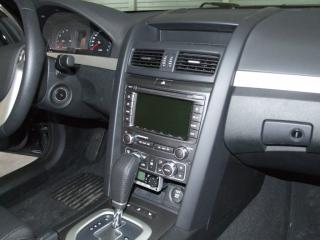 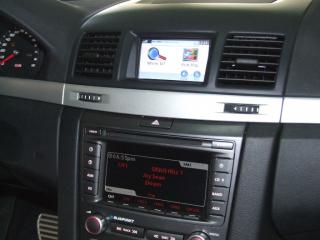 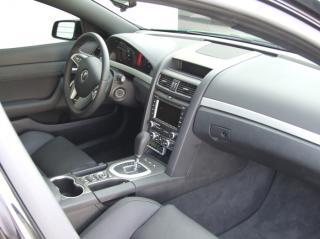 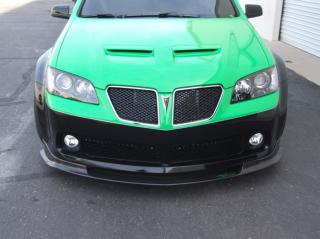 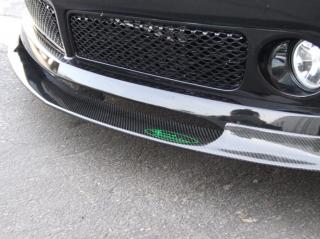 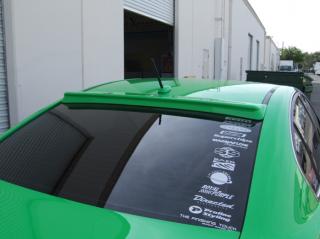 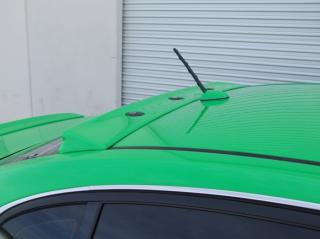 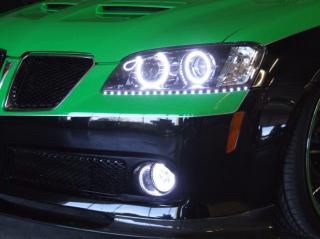 The rear boot area is home to the Kicker audio system. We fabricated a custom enclosure with a plexi glass window and painted the inside of the box with PPG green/gold flake paint to match for the 2 Kicker 12" sub woofers. Off to one side using 1/2" steel square tubing we fabricated a metal amp rack for the 2 Kicker amplifiers.

To add additional lighting and to look cool, we added green LED's to highlight the system.

To keep the young ones at bay we modified the factory head rests and added 7" LCD monitors wired up to a Sirius Backseat Satellite TV system.

The factory head unit was retained for CD/AM/FM by using a Rockford Fosgate 360.2 processor. Sirius satellite radio was also added. Note the storage area above the radio before navigation modification took place.

We added a Garmin Nuvi Navigation system in the storage pocket area that was above the radio.

The controller for the Sirius Backseat TV system mounted below the climate controls.

To compliment the lowered stance we fabricated a one-off carbon fiber front lip spoiler. After many months of requests, we finally made a mold of the spoiler so you can have one for your G8 too.

To add additional visual appeal we fabbed up a rear roof top spoiler using fiberglass and painted to match.

Instead of have three Sirius antenna on the roof, we made locations within the roof top spoiler by laminating steel plates for the antenna to mount to and made provisions for concealed wiring

For more uniqueness the headlight were outfitted with a 6000K HID kit. The light were also dissassembled and LED Halo rings were added along with LED strip light below to give it the "Audi look".

This basic black sedan got a complete make-over starting out with PPG green/gold flake paint on the upper half, wheel/tire package, a lowered stance, Magnaflow Exhaust system, and supercharger to kick up the horsepower. We then got to do our magic, adding a Kicker sound system, Garmin navigation system, some headlight modifications and really cool carbon fiber front lip spoiler and rear roof top spoiler.